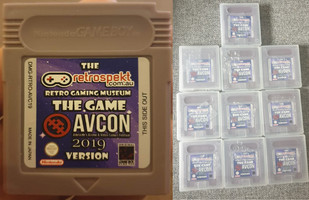 (Full write up at www.retrospekt.com.au)

Earlier this year in July, and the same weekend as AVCon 2019, Retrospekt posted up an article for the early version of a Game Boy game based on both the convention itself as well as the annual retro gaming museum Retrospekt puts together there.

It had bugs, a couple of errors and a glitch or two but the response from players was overwhelmingly positive and for that first of all I thank you. Second of all, the reception gave me the motivation to finish it off so again, thank you. Completing the project took longer than anticipated, due to a few factors. One of which being burning myself out a tad due to crunching hard to get that version done in a couple days ready for the convention. I took a break from it 'til early November and paced myself more which both made the experience more enjoyable and more getting done, but much less mistakes being made as well.

One of the other factors being unexpected roadblocks along the way. These are always to be expecting when trying to make anything but they still crept up from time to time. Iv'e learnt a lot from those factors I just mentioned though, as well as learning and improving a lot on the development side with GBStudio (which is what I used to make the game), so I'm happy to say that the game is now complete and ready to be unleashed.

"Retrospekt, the retro gaming hub of South Australia, bring to you this virtual tour through the annual AVCon Adelaide and Video Games Festival’s 2019 event.

A mysterious fellow in a coat with a huge ego won’t leave you alone, but you don’t care, you’re enjoying the atmosphere of the convention. That is ‘til you’re whisked away to another dimension. Or pushing ducks towards a hairy monster. Or having to stand in line.

It’s all worth it though as you make your way towards the final goal; the Retrospekt Gaming Museum.

Take a trip through gaming history and learn along the way as you experience this pixelated recreation of the Retro Gaming Museum that Retrospekt has put together many times over the years and various events, including yearly at AVCon."

As said in the original article:

All the consoles and computers you can find at the event are in the game with information sheets containing trivia for each console/computer. There’s plenty to do, many people to speak to and lots of lil things to experience. Oh, there’s even a final boss to beat…

Made with GB Studio, a recently released Game Boy game creation tool, it’s not only available to play online right now on PC, Mac, Linux, and mobile (with included Game Boy style touch screen button controls), but if you download the Game Boy ROM file you can play it on an emulator or on an actual Game Boy (if you have an appropriate flash cartridge). "

In relation to the many people you can speak to I mentioned above, you'll find AVCon guests from the events history in the game, along with familiar faces related to AVCon from past to present. There's even some guests from other related nerdy type conventions, and even some GB Studio types within.

And a LOT of other people turned into sprites, a whole lot. Over 151 humans have been converted into pixelated characters (closer to 160), each with dialog. Even some animals in there too.

There's a large amount of what you could find at AVCon 2019 here, compacted down to Game Boy size. Over seventy five scenes, with fifty rooms to explore and nearly thirty classic consoles and computers in the Retro Gaming area. Each with fact sheets you can read to learn a bit more about your favourites.

I hope you enjoy playing the game, if you've attended AVCon or if this is your first time attending. In Game Boy game form. The hard work was worth it and thanks for playing.

Get The Retrospekt.com.au Retro Gaming Museum The Game AVCon 2019 Version