A downloadable game for Windows, macOS, Linux, and Android

So this originally covered only one of the Sezza Twitch art themes.. Then I didn't get it finished on time. So I popped in the next weeks theme. And...that repeated for two months. 'Til I got it just about finished recently...buuut added two more haha. Has possibly ended up being my biggest project so far due to this, which is kinda neat. Despite probably being a bit all over the place. But I'm glad it's mostly done from the looks, despite a few graphical errors here and there. And I buggered up a few of the usernames which I needa go back and fix. As well as other stuff I've probably missed buuut it's there's enough to play haha.

Unfortunately I wasn't able to get a web version goin' due to a few errors I needa fix up with the GBStudio software I, so only the Game Boy ROM's available.

Here's a list of the (so so many, oof) themes and weeks covered too:

I still need to add more to this description, like music file credits and an edited video of when the game was played live on stream but I will add a link to suitntie22's brilliant F-Zero P, which was the framework for the gameplay of Weakly Themes. Everything they make is amazing too so give 'em a looksie.

Aaaanyway, hopefully it all works fine...hopefully haha. Aaand if it does; enjoy the game! 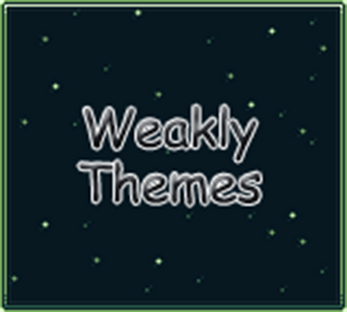